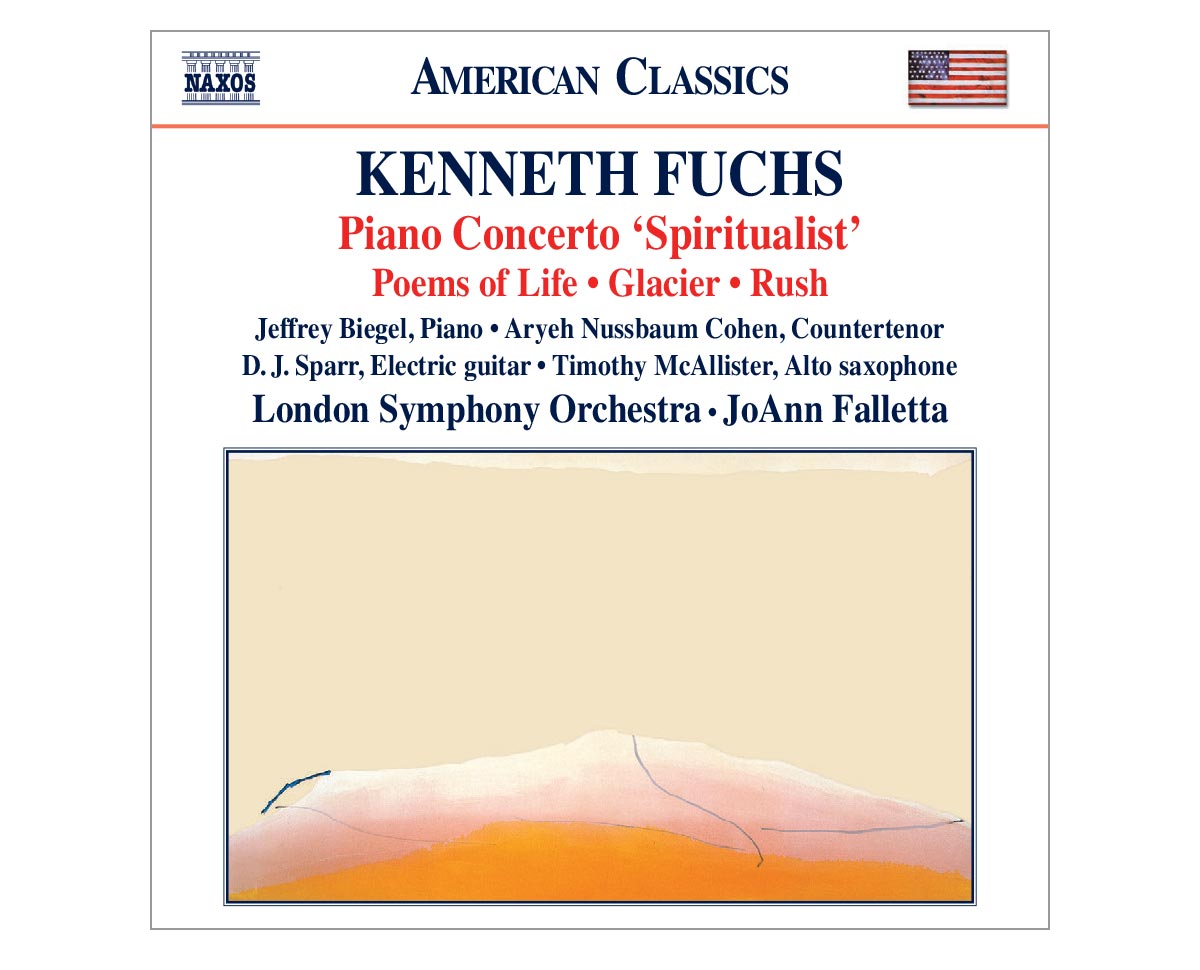 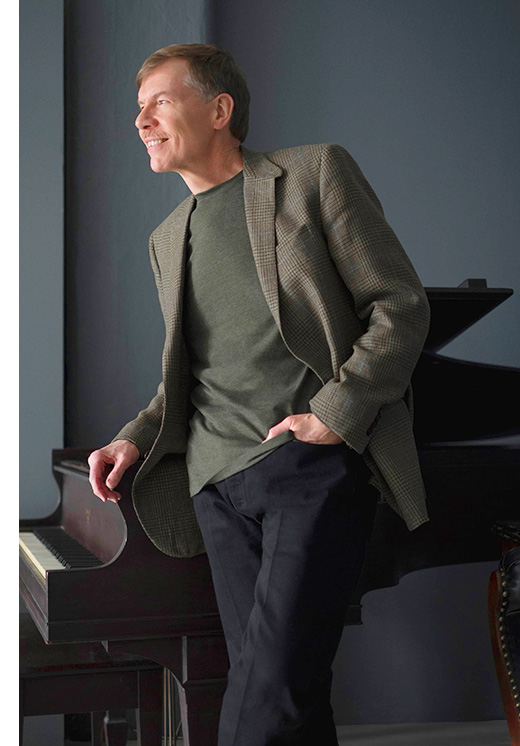 You are invited to listen to three concertos and a song cycle composed by Kenneth Fuchs and performed by the London Symphony Orchestra under the direction of JoAnn Falletta and featuring soloists Tim McAllister, saxophone, Jeffrey Biegel, piano, Aryeh Nussbaum Cohen, countertenor, and D. J. Sparr, electric guitar. The album has been nominated for the GRAMMY® Award in the Classical Field, in the category “Best Classical Compendium.”

WATCH A VIDEO ABOUT THE RECORDING AT ABBEY ROAD STUDIOS 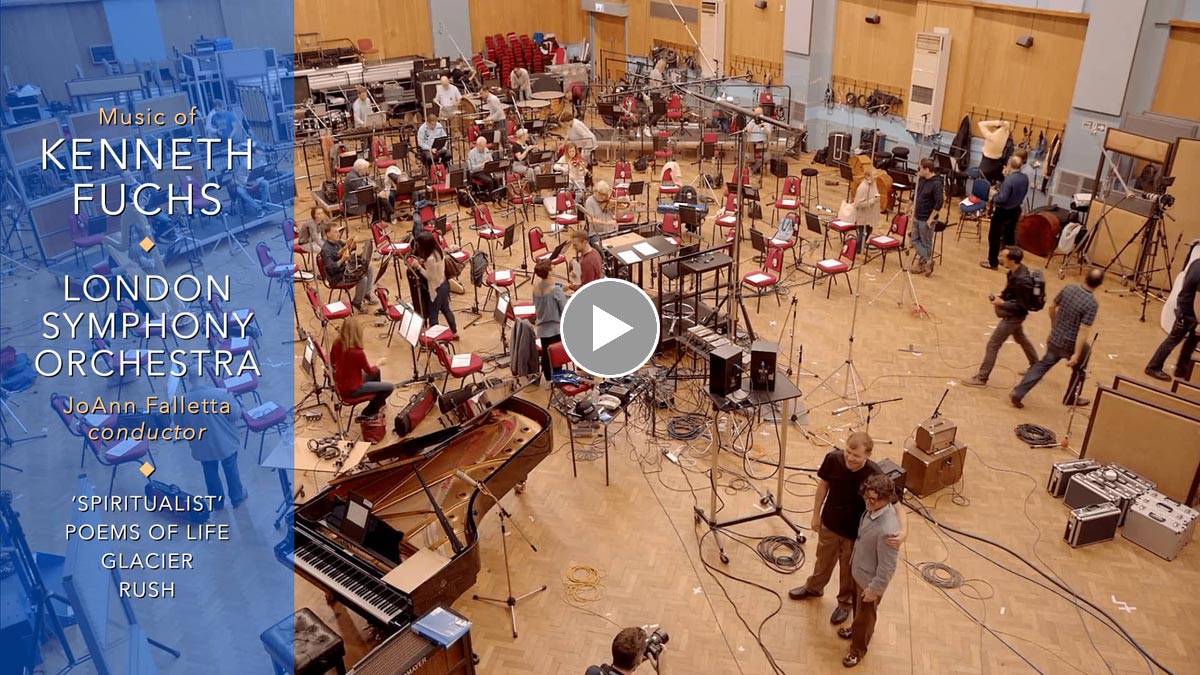 “The American composer Kenneth Fuchs now has quite a sizeable discography of his music on Naxos, invariably played by the LSO who have played a major role in inspiring him to write for the orchestra with impressive authority and imagination. The latest volume, out today, includes a piano concerto but also a lovely work for electric guitar and orchestra, Glacier – it’s atmospheric, written and performed with great flair in a highly approachable idiom. Fuchs writes music that LSO plays with total grasp of the idiom (it's not a million miles away from film music in colour, and JoAnn Falletta understands the style perfectly.)”
— https://www.gramophone.co.uk/blog/the-listening-room/the-listening-room-episode-40-10818

“Last week’s playlist included a new work by the American composer Kenneth Fuchs, Glacier – the only reason I didn’t alight on his Piano Concerto is that I already had a striking piano concerto by Mendelssohn. So this week I am including the Fuchs Piano Concerto, played with terrific authority by Jeffrey Biegel and with some gorgeous sounds from the LSO.”
— https://www.gramophone.co.uk/blog/the-listening-room/the-listening-room-episode-41-17818

“The song-cycle Poems of Life (2017) is the heart of this well-played, sumptuously scored programme. Setting 12 poems by Judith G Wolf about love, grief and emotional and spiritual progression, the cycle is cast as a triptych with framing prologue and epilogue. The 12 poems are dispersed unevenly between these sections, within which they flow seamlessly. It is a beautifully conceived cycle, the music tender and rich, the solo cellist and cor anglais (the wonderful Tim Hugh and Christine Pendrill) amplifying respectively the persona of the countertenor in the songs and his lost beloved. Aryeh Nussbaum Cohen sang the premiere in Virginia and has the work fully under his skin; the accompaniment by the LSO is first-rate.

“So is their playing in the three concertos, too, their experience of Fuchs’s style from four previous albums (recorded between 2004 and 2014; this newcomer was set down in August 2017) showing. The concertos are all very different in format, with only that for piano, Spiritualist (2016) – named after the first of three paintings by Helen Frankenthaler – using the regular fast-slow-fast template. The Piano Concerto is a deftly constructed set of responses to Frankenthaler’s paintings (Silent Wish, which inspired the central movement, adorns the booklet cover), but I do not think it communicates quite the depth of artistic debt to the painter about which Fuchs writes eloquently in the booklet, despite the virtuoso advocacy of Jeffrey Biegel (for whom it was written).

“Glacier (2015) is a suite in five picturesque movements for electric guitar inspired by Montana’s national parks, while Rush is a rather Bernsteinian diptych for alto saxophone with a punchy, roof-raising final passacaglia. Both soloists are exemplary. Naxos’s sound is terrific.”   — Guy Rickards

KENNETH FUCHS • COMPOSER
5 Mohegan Sq, Mansfield CT 06250
You are receiving this message because you have corresponded with Kenneth Fuchs.
Unsubscribe from this mailing list